In the control of mosquitoes and mosquito borne diseases, eliminating breeding areas is considered a good practice.  In fact, it is a legal offence in Singapore to be caught breeding mosquitoes.  You may be subjected to a hefty fine for any mosquito larvae found on your premises.

Mosquitoes breed in stagnant bodies of water such as: 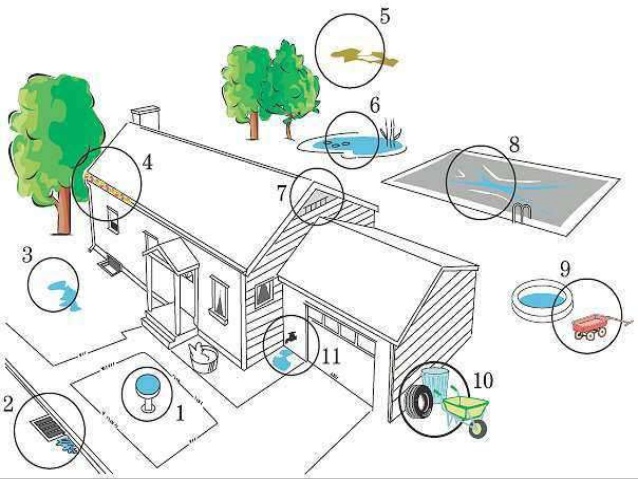 Common varieties of local fish such as guppies and barbs eat mosquito larvae, and small numbers of these can be introduced into water features to control mosquito breeding, without fouling up the water. If you live near a field or wooded area, then it may not be possible to eliminate all nearby breeding sites, as water may collect on the grass, in dead leaves, or even on tree-tops.

Mosquito Management System also offers effective outdoor solutions which attract adult female mosquitoes away from offices and dwellings, and destroy them before they have a chance to breed.

Having survived for almost 79 million years, mosquitoes are without doubt a hardy species, and it is very difficult, if not impossible, to completely eradicate mosquitoes. Indeed, many scientists believe that the complete eradication of mosquitoes will do more harm to an ecosystem. To date, the best approach to controlling and managing a population of mosquitoes at non-problematic levels is to use a two-pronged approach of destroying female mosquitoes and eliminating breeding sites.

Need help? Feel free to contact us to find out more.

What attracts mosquitoes and why do they favor one person over the other? Expand

Given that mosquitoes are generally attracted to a wide combination of sight, smell (from 400 different compounds), and sound, researchers have yet to find the most ideal target of mosquitoes. They have managed to identify certain body chemistries that are determining factors of our susceptibility to mosquito bites.

Heat, produced due to exothermic reactions in our muscles as they break down sugars for energy, acts as a guiding system for where mosquitoes can bite you. As our body generates heat, heat must be released which falls on the responsibility of our circulatory system (ie. our veins and arteries). This means that in order for us to release heat, blood must run closer to our skin. Mosquitoes have adapted themselves to identify these heat sources as potential blood rich areas and will seek out heat sources. A particularly over heated person means that more blood is closer to the skin, making them even more attractive to mosquitoes.

Certain mosquitoes are visual hunters meaning mosquitoes are attracted to dark, moving objects as they often stand out against the horizon. To avoid being a target, wear lighter colours.

Various naturally occurring chemicals produced by our bodies, such as lactic acid, octanol, and estrogen, also attract mosquitoes, although in exact levels of attractant. The exact composition and concentration is still being studied.

What is ULV fogging (Misting) and how is it different from thermal fogging? Expand

ULV fogging, short for Ultra Low Volume Fogging, is the aerial application of insecticides through the use of a ULV fogger. These foggers use a specially designed nozzle that compresses the insecticides before blowing them out, resulting in a fine mist that will drift around before settling down. Unlike thermal foggers, ULV foggers do not use a heater or produce exhaust gasses, making them safe and useable both outdoors and indoors.

Are your products safe? Expand

GRUNPRO Aegis (Ready To Use), which we recommend for use in all our foggers, is a pyrethroid-based broad spectrum insecticide for household end users. This spray solution is capable of killing mosquitoes and flies via thermal fogging or ultra-low volume misting. GRUNPRO Aegis has been approved as a minimum-risk product and can safely be used for home use.

Pyrethrin/Permethrin, which is the active ingredient used in the mosquito ULV Fogging system, is commonly found in many insecticide as well as other household products such as pet shampoos. They are known to have low toxicity towards humans and are the least poisonous insecticides to mammals. Pyrethrin is naturally extracted from chrysanthemum and quickly degrades in sunlight, meaning that no residue will linger. Permethrin, on the other hand, is the synthetic version of pyrethrin. The main difference is that Permethrin lasts longer in sunlight, making it ideal for places with a high presence of mosquitoes. While these chemicals are regarded as no risk of concern, we do not advise people to purposely come into direct contact with the mists.

What product is more suitable for me? Expand

If you wish to protect an apartment unit, office unit, warehouse/workshop unit:

Only mosquito traps can be used and is recommended to be used in conjunction with other mosquito control measures to follow an Integrated Pest Control (IPC) approach.  If the infestation is bad, you may want to find out more from your building management or council what measures are being taking to control the mosquito population.  Mosquito Management System also offers DIY and automated misting systems to protect entire compounds (see below) should the management or council wishes to do more.

Automated misting systems and DIY ULV foggers(misters) are more suitable as they are able to effectively take care of the premises' exterior.  Upfront costs for the automated systems are higher than DIY misters, but are much more effective and less labor intensive.  Usually, with good housekeeping, you will not need further mosquito control measures indoors if you have an automated misting system set up.  Of course, for the best protection, the IPC approach is highly recommended by adding mosquito traps in conjunction with misting.

Ready to get started? Contact us today for a non-obligatory site survey and quote!