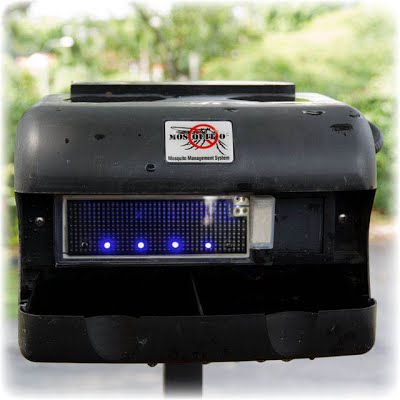 The Mosquito Slayer uses 8 attractants including Lactic Acid, Octenol and Carbon dioxide. It is designed specifically to attract biting female mosquitoes, whereas other traps catch a higher proportion of male mosquitoes. Male mosquitoes are purely nectar feeders, and don't bite or transmit diseases. This is why the Mosquito Slayer is more efficient and effective than conventional traps.

Clean, virtually silent (but for the sound mimicking the feeding frenzy produced when mosquitoes discover a blood feed) and invisible, the Mosquito Slayer is small, unobtrusive and easy to install. It is simply a matter of standing or mounting it near the most concerning or problematic areas in your garden.

While the importance of physically eliminating mosquito breeding sites cannot be overstated, this virtually silent, 100% environmentally friendly trap can help reduce the population of biting insects and mosquitoes around your home and workplace, destroying female mosquitoes before they have a chance to lay their eggs, and killing biting mosquitoes that are already flying around.

The Mosquito Slayer uses the very same elements that attract blood-sucking insects to humans to lure them into its trap. Carbon dioxide is released over a special formulation of attractant. The release of gas is precisely controlled via the internal computer, negating the need for an expensive regulator as well as producing the same amount of gas that three humans would exhale.

A small electric fan sends the aroma wafting through the air, and although imperceptible to humans, blood-sucking insects find it irresistible. As the insects draw closer, they are further attracted by spectrum and ultraviolet lights leading them towards the opening. When they enter, they are caught in the vortex of a fan which blows them into a tray of attractant solution, where they get stuck and drown.

The Mosquito Slayer is principally a wet trap which kills by drowning, and requires the constant top up of attractant solution, especially in tropical Singapore where the liquid evaporates at a quicker rate.

Mosquito Slayer is designed to be left on 24/7, to provide constant protection for you and your family.

Mosquito Slayer makes use of 8 scientifically proven attractants, and the combination and precise quantity of each of the components make it the most effective device in the control of adult female mosquitoes, midges and sand flies in the world.

The first step in the attraction process is the periodic release of short bursts of carbon dioxide. Carbon dioxide is used to attract mosquitoes and other blood-sucking insects from a distance in the same way that carbon dioxide from the breath of humans and animals help mosquitoes find their prey. The Mosquito Slayer uses standard carbon dioxide gas that is colourless and odourless.

An irresistible lure for biting insects, Lactic acid is the second essential element in the attraction process. A special formulation of low concentration Lactic acid is the primary component of the Mosquito Slayer's attractant solution.

Octenol mimics the odour of human sweat, and makes sure that biting insects are unable to resist the lure of the trap acting as a medium-range attractant that guides mosquitoes and other biting insects towards the trap.

At closer range, the Mosquito Slayer uses heat and moisture to lure mosquitoes and other blood-sucking insects into the entrance. Inside the trap, a heater warms and evaporates the attractant solution, creating a moist environment at temperatures resembling that of body temperature. The electric fan sends the aroma of the warm solution wafting through the surroundings, attracting biting insects.

The light technology used in the Mosquito Slayer is unique in its application to attract all species of biting insects. Mosquitoes, midges, sand flies and fleas respond to the attraction of the lamp, which makes use of pulsating multi-coloured lights to mimic motion.

The final nail in the coffin for biting insects, a patented high frequency oscillator mimics the noise produced during a mosquito feeding frenzy, which draws female mosquitoes towards a potential meal.

Mosquitoes are attracted to darker colours, and so the Mosquito Slayer is manufactured in black. We recognise that a black colour scheme may not be suitable for all landscapes, and have also developed a dark shade of green which does not compromise the operation of the trap.

The Mosquito Slayer is designed as an outdoor product to be mounted on pickets place around the perimeter of your compound.

The unit is weatherproof, and is designed to be left on 24/7 for uninterrupted protection.

As a key component of the Mosquito Slayer is an exposed tray of Lactic acid lure, the unit should be placed out of reach of children, pets and curious animals. Where this is not possible, we are able to install a sturdy wire mesh around the unit to prevent accidental contact and ingestion. Although Lactic acid is not toxic to humans in small quantities, prolonged skin contact or ingestion may cause discomfort. The wire mesh minimally impedes the effectiveness of the trap.

While the Mosquito Slayer may be used as a standalone trap, it is recommended to be placed as part of a larger abatement and control system protecting an entire premise.