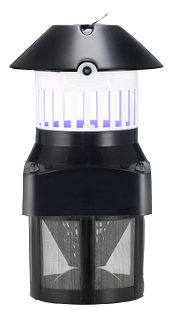 Active attractants come in the form of a slow release cartridge which gradually depletes. Attractant cartridges are safe to handle and easy to replace.

Lactic acid is the substance muscles produce as a by-product of exercise. Through sweat and perspiration, small amounts of lactic acid are released into the air, the scent of which also attracts mosquitoes.

Lactic acid is odorless in the amounts released by Intelligent Mosquito Trap. The attractant is contained securely in the locked base of the trap, so that children and pets will not come into accidental contact with it.

Octenol is a chemical contained in small quantities in human breath and sweat. It is odorless at the levels released by Mostrap, and like all our active attractants, it is stored such that accidental contact is minimized.

A large variety of insect pests are attracted to ultraviolet (UV) light, as a result of the structure of their compound eyes. Insects fly towards the light until they are sucked into the trap by its powerful fan.